No Need to Fetishize The Kurds in order to bash Arabs 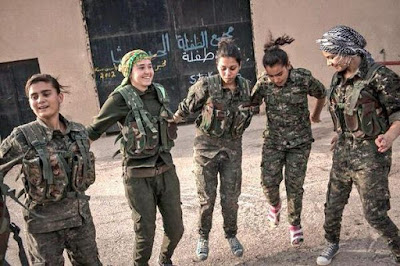 If you follow current events in Syria and Iraq, you may have come across the phenomenom of the Klashnikov-clad ‘jihadi bride. Who flocking from a city near you are seeking to repopulate and help build a dystopic, totalitarian, imperialist, super state "The Islamic State" that in their view will be the vanguard of the Muslim world to 'libertate' them from Western domination.

In complete contrast, we encounter their polar opposite, the female fighters of the Kurdish resistance who exemplify a far better display of female strength than the nihilistic, pin up stars of ISIS. They have rightly been glorified as heroines. Of course, there has been some sensationalism, where you always get the pin up star who is alleged to have killed a innumerable amount of ISIS fighters. Nontheless, it isn't that hard to feel a certain amount of satisfaction (dare I say pleasure) in seeing these fighters liberate areas controlled by ISIS.

However, some have pointed out that these Kurdish women have been fetishized by some people in the West into orientalist tropes for their own cynical reasons, not out of any geniuine solidarity with the Kurdish people and their struggle.

This Kurdi-fetishism knows no bounds. We encounter two types of this phenomenom, one is the more misguided leftist tendancy, which sometimes fethishizes revolutionaries that are not white and will ignore their failings. Yes, even the PYD has its flaws. The other is right wing, which uses the Kurdish struggle as a pretext to express their hatred towards Arabs and Muslims. Interestingly, there are occasions when the two do intersect.

However, for the purpose of this post I will focus mostly on the right wing (more like extreme right wing judging by the meme below), anti-Arab fetishization. 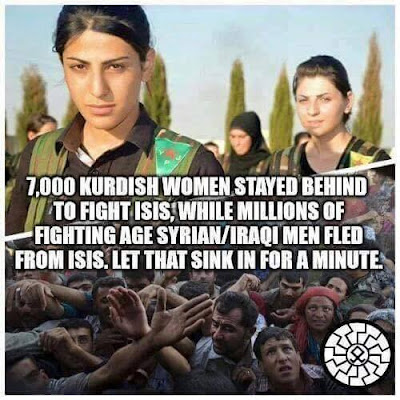 Notice the Black Sun symbol with an odal rune (used by the Waffen SS) in the middle of it. These are well known Neo-Nazi symbols. This ridiculous propaganda is being used by Nazis now to attack Syrian and Iraqi refugees, some of whom are Kurdish, by the way. Unfortunately, there are even documented cases of Kurdish refugees drowning in the Aegean Sea on their way to reach safety in Greece. These same Kurdish refugees are the same people which these Fascist scum despise with a passion and portray as "Muslim invaders" threatening White, European, Christian identity.

If people wonder why the majority of refugees from the Middle East come from Syria, it's because the Assad regime, backed by Iran and Russia are using their aerial capabilities to ethnically cleanse areas of Syria, liberated from the Assad regime's control, as a matter of policy. In the last few months, during Russia's attacks on Aleppo, 40,000 people fled. Moreover, Russia's recent attack on Daraa province, according to rebel media has displaced as many as 150,000 Syrians.

Some of those fleeing are Syrian Kurds, of course, some of them live in the same neighbourhoods as Syrian Arabs. In the Kurdish-majority areas of Northeastern Syria, they've never faced aerial bombardment from any force, while their Arab Muslim brethren have faced bombs daily in Aleppo, Homs, Hama, Idlib etc. Likwise, when ISIS attacked Kobane in 2014, the entire civilian population rightfully fled to Turkey.


Make no mistake about it - the intent of this meme is to spread anti-Arab and anti-Muslim bigotry. Aside from the extremely creepy fetishization of Kurdish women, it has entered into the popular consciousness that Kurds are somehow all these ultra-secular, counter-Islamic, super human, noble savages.

They're not noble savages. The majority of them are Sunni Muslims, some of whom are quite religious, others barely religious and many in between. They're just people. Many members of secular Kurdish groups such as the PKK and PYD are practicing Muslims; who pray five times a day, fast during Ramadan, read the Qu'ran, go to the mosque etc. Likewise, many women in the YPJ wear the hijab, not just the traditional Kurdish headscarf, while at the same time supporting the radical, progressive, socialist, ultra feminist values the PYD embodies. The irony is, their ideology is the total antithesis of the anti Muslim's backward, orientalist, worldview of the Neo Nazi producers of the meme.

As for the cheap shot about Syrian/Iraqi Arab men being cowards. It goes to show their ignorance, because there are many men who do stay in Syria and fight in order to overthrow the Assad regime, but it also shows the lack of empathy they have. The men who are fleeing are sensible. Most have essentially three choices other than escape: join a murderous dictator's army; join ISIS' death squads; or die, most likely in an excrutiating manner. I know which option I'd take if I was in their shoes.

These Nazi scum will never know what it's like to be a Syrian or Iraqi, whether rebel or refugee, and will never understand the horrors visited upon these poor people. The fact that this obscene propaganda is reproduced fairly regularly on social media rather telling of how worrying this rising anti-Arab/Muslim sentiment disguising itself as "pro-Kurd" or "anti-ISIS" has become.

For all anecdotes are worth, I have spoken to the few Kurdish comrades (male and female) that I do know, they tell me that they don't like this weird fetishization of Kurdish female fighters which they regard as an insult. They do not see it as flattery.

Of course, there is nothing wrong with supporting the Kurds, just because you support the Kurdish struggle doesn't automatically make you an anti-Arab racist or an anti-Muslim bigot, obviosly. I have always supported them and always will. However, acknowledge the Kurds for who they are, their history, struggle and appreciate the various contradictions and antagonisms in Kurdish society and culture.

Please guard against the impulse to mystify Kurdish women who happen to be adept with an AK-47, so that you can use them as a vehicle to promote an anti Arab or anti Muslim agenda. It shows indifference to the suffering of Syrians and their revolution against the murderous Assad regime and is disrespectful to the Kurdish people, who also have had to sacrifice alot to fight for their rights. This is not solidarity, it is exploitation.

Posted by The Rambling Infidel at 17:57