My Thoughts on The Paris Attacks 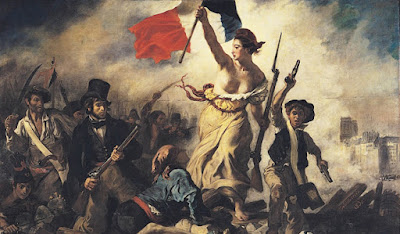 On Friday morning, one would have not been mistaken to think that the fight against ISIS had made some positive progress, with the liberation of Shingal by The Peshmerga from ISIS' dominion in northern Iraq and the killing by drone strike of Muhammad Emwazi (Jihadi John). Albeit the killing of Emwazi was more symbolic than catergorical and the liberation of Shingal is not exactly going to speed up the inevitable defeat of ISIS.

However, on Friday night in Paris, we were reminded again that this Jihadist cancer is still alive and well gnawing away at civilisation just like they had done a few days ago with the suicide bombings in Beirut and the beheadings of Shia Hazaras in Afghanistan. In Paris, terrorists launched a series of attacks that have claimed the lives of at least 160 people and 300 people injured. This make it the deadliest terrorist attacks in Europe since the Madrid bombings in 2004. ISIS has released a statement where they claimed responsibility for this and we definetly know it was a Jihadist attack because we have credible reports the gument shouted "Allahu Akbar" as they slayed the innocent.

In the aftermath of these horrific attacks, I have noticed alot of kneejerk finger pointing and simplistic analysis which is often done through a political lense that lacks complexity and nuance. You have the regressive left essentially blaming Western foreign policy and changing the subject to irrelevant topics. While on the other side you have those who want to shoehorn immigration and the refugee issue into this debate because that is their pet issue they want to talk about.

To be honest, I really am not surprised or shocked by the fact that we got the usual deflection, obsfucations and masochism from the regressive left.

Cenk Uygur of The Young Turks first response to the Paris attacks was to change the subject to Dylan Roof and the Iraq war. Later in the show one of his colleagues claimed that France closing it's borders will potentially "further radicalize muslims".  This clearly bigotry of lower expectations. So muslims will all of a sudden start killing people if they don't get the desired immigration policy they want. How contemptable. The closing of the borders is likely a short term measure as part of the state of emergency France is under right now. However, suppose France did make this a long term policy, it still would not provide an excuse or an "explaination" for radicalization. Despicable. 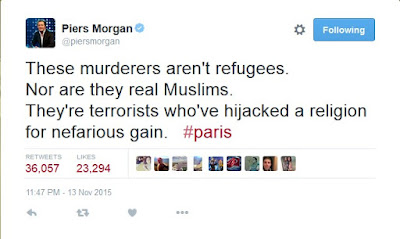 WOW! I am so glad we have Ayatollah Piers Morgan to be arbiter of who is a "real" muslim and who is not a "real" muslim thereby engaging in takfiri reasoning and Kuffarsplaining. Piers has probably never read the Qu'ran in his life, yet he considers himself an expert in Islam. 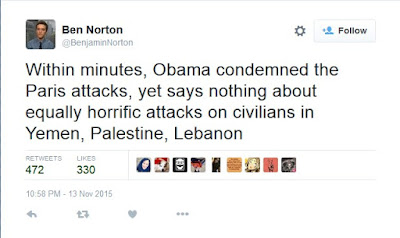 Another trait in the regressive state of mind is to dig  for western "hypocrisy" in light of a terrorist attack in the west and engage in fatuous whataboutery. Notice he had to shoehorn Palestine in there as per usual. Don't get me wrong the problems in  Palestine, Lebanon and Yemen are serious issues that definetly should be talked about, but why is Ben excavating for "hypocrisy" now? I'm afraid I find this contemptable. 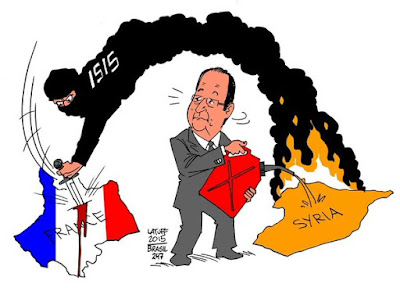 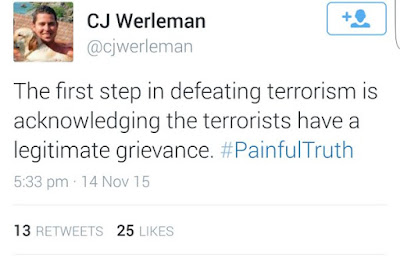 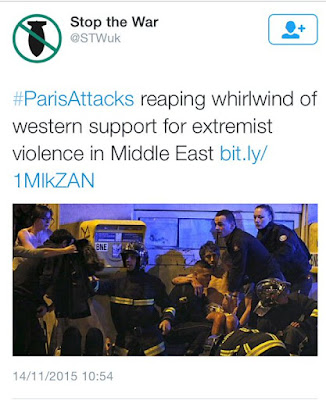 Then we have the "grievance" argument. Remember when regressives talk about "grievances" in relation to Islamist terrorism what they mean is "this attack happened because of "Western foreign policy" which is what the Latuff cartoon above implies. This a simplistic and wrong analysis of the situation.  The attackers did not target symbols of French militarism or the French state. Rather, they attacked places where young, multi-ethnic and cosmopolitan Parisians hanged out such as cafes, resturaunts and bars like La Belle Equipe, Le Petit Cambodge and the Jewish owned music venue Bataclan.

The other venue attacked was the Stade de France, the home of the French national football team, (Les Bleus) another symbol of multi-racial and multi-cultural France.

For too long now the regressive left has said that these Jihadists are the bullhorn of long forgotten "muslim grievances". I suppose they are, if you want to define a "muslim grievance" as the grievance of seeing an undraped female head or face,  the hatred of cosmopolitanism and cultural diversity embodied in cities like Paris, the presence of a Shia muslim, a Jew and non-muslims on what you claim as "muslim soil". The horror of not having an totalitarian, imperialist super state called the Caliphate which they have now resurrected in Iraq and Syria. Anything can be twisted into a grievance by Jihadists.

Yes they have grievances, but it is nothing like the grievance we have with them. It should be we who they are afraid of, it should be our opinion that they should be worried about. Because we too have unalterable values and we do care about defending The Enlightenment and the values of a civlized world.

While the regressive left tried to play the card of masochism and blame terror attacks on Western foreign policy, some on the right have and will try to ramp up an anti-immigrant agenda, the more extreme elements will go for a more anti-muslim agenda. 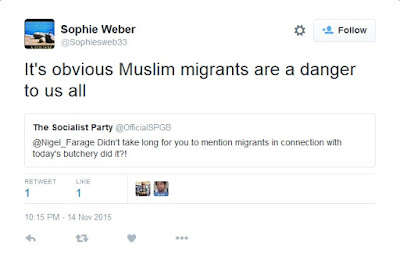 As of now we're not sure of the backgrounds of all the attackers. We do know that a Syrian Passport was found next to one of the gunmen belonged to someone who registered as a refugee.They are also checking on the fingerprints of another man at the request of French investigators. However, authorities are not ruling out the possibility that the passport may have been a fake or may have been stolen or bought from a well established black market.

Another question that must be asked is why would a Jihadist who thinks modern notions of citizenship and nationality is haram, all of a sudden take his passport to a suicide mission and make sure it got found? For me this seems too calculated.

A plausible alternative theory could be that they used this passport so that they could tap into the anti-refugee sentiment in Europe in order to further discredit and delegitimize the refugees who are fleeing the nihilistic carnage that is currently engufling Syria of which ISIS has had a part in committing. In fact, ISIS loathes those fleeing to Europe from Syria. They view them as sinners because they are not going to their Caliphate.

I am not saying this is the right one because ultimately we don't know for certain if the Syrian passport found next to the Jihadist is actually his passport or if it's just a fake or if its one that has changed hands.

Let us assume anyways that at least one of them was an imposter refugee (which is possible) then it will raise questions about the extent of the fear of ISIS infiltration into Europe among the refugees and migrants coming into Europe. These fears should not always be dismissed out of hand because as Patrick Kinglsley writes here in The Guardian

"Thousands of refugees arrive on the Greek islands every day. While each has to be registered before they can make it to the Greek mainland, the process is a brief formality rather than a lengthy investigation. In registrations witnessed by the Guardian during the summer, refugees simply presented identification to the Greek authorities, before being allowed to leave minutes later without anything like a background check."

Shows that in theory, if a would be terrorist wanted to reach Europe through Lesbos in Greece, it would be relatively simple to do.

Still, the arguments linking the Paris attacks and Jihadism to the refugee crisis are still questionable and closing the borders completely to Syrian refugees is not an answer. It is just a kneejerk, reactionary policy that will not decrease terrorism. This is because most Jihadist terrorism in Europe has come from people who are homegrown. It is that homegrown Jihadist threat that needs to be tackled, diverting the issue towards refugees is not serious analysis, it is just posturing and unncessary fear mongering.

Again, I must stress that this is not to say that you can't have a debate on the refugee/migrant issue. It is just that linking it as an explaination for the problem of Jihadism is questionable.

If anything this attack should make us a little more empathetic, possibly even sympathetic if we can manage the task towards Syrian refugees who have faced this kind of violence nearly every day for the past four years.

This article sums up why we should be cautious about the Syrian Passport angle for now until we get more evidence.

We must then be very careful not to give the Jihadists what they want which is further polarisation. This is an established part of their strategy, to eliminate the grayzone or in other words make this a "West vs Islam" conflict. We cannot make this into an anti-muslim crusade, we must maintain that moral distinction between criticising ideas and spreading hate about people. Insisting on this is not "moralizing" or being "PC". It is an absoulute fucking necessity. 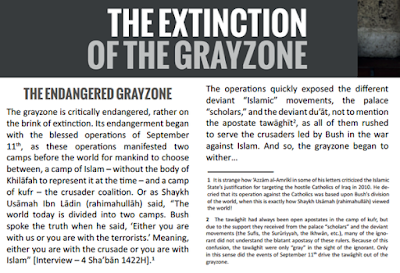 Sadly, there will be muslims who bare no responsibility for these attacks who will recieve bigotry as a result and possibly may experience hate crimes as "retribution". If and when they occur they must be condemed absoulutely and every action must be taken to prevent and punish such incidents, just like we do with anti-semitic, homophobic and racist hate crimes. We should never enter realms of collective blame as it risks futher tearing apart our civilisation.

In closing, I will say to my ordinary muslim comrades that you don't have anything to apologise for and you don't have any responsibility for attacks committed by Jihadists. However, I would plead to you to not deny that there is a problem, not to obsfucate on the issue of Islamism and Jihadism, or come out with banal platitudes like "this has nothing to do with Islam". That statement is flat out untrue and it does not help in decreasing anti-muslim bigotry because it is so intellectually dishonest and gives the impression that muslims have something to hide.

While it is also true that many muslims and muslim organizations condemn Jihadist attacks. This is obviously good and it should be acknowledged. However, the bar should not be set so low that merely condemning ISIS is enough. What is required in the long term to win this struggle against Islamism is to first, admit that a problem called Islamism exists and not to deny it's connection to Islam. Second, show solidarity with brave muslims reformers like Maajid Nawaz and Iyad El-Baghdadi and non muslims alike in helping the civil society lead, universal values based resistance against Islamism and Jihadism.

I just wish we can have an honest debate about Islamism/Jihadism without the denial, masochism, obsfucation and crass moral equivalences of the regressive left. Ultimately, if reasonable people cannot take control of the debate then the far-right and neo-Fascists are very happy to dictate the terms of the debate. This will not be good for our civilisation because the far-right are not interested in debating bad ideas and trying to save civilisation and culture. They want to tear it apart aswell.

In the end, our love for Paris will outlive and destroy the Jihadist's hatred of life, liberty and the pursuit of happiness.